It can be difficult to discern the best age to retire for longevity.

You may have heard of a friend or colleague who passed a few years or months after their retirement.

At the same time, some people seem to have figured out the secret to living a long life after retirement after retiring early. 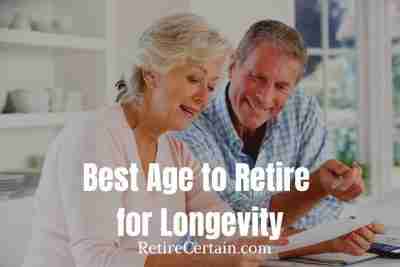 Retirement is a very personal choice without a clear cut rule for everyone.

That said, various studies around the world have reached different conclusions about retirement and health or longevity.

Finding the best age to retire for longevity can help you in your quest for a long life, so start with determining the impact of retirement on your health.

Because, after all, what good does it do to retire if you’re not healthy enough to enjoy retirement?

This question is the perfect segway to the next question.

Is Retirement Good or Bad for your Health?

Retirement is a double edged sword, depending on how you choose to live after you retire.

If you adopt good behaviors and a healthy lifestyle, it can contribute to a long life after retirement.

However, living a sedentary lifestyle after retirement can hurt longevity.

Research published in The National Library of Medicine on the best age to retire for longevity specifically revealed that Shell Oil employees who retired at 55 and were alive in the next decade had higher mortality rates than those who worked until 65.

What could explain this?

Many people, however, work in stressful or physically taxing jobs that cause fatigue and other depressive symptoms.

Early retirement eases the constant stress and pressures that come with working in a fast-paced environment. You will no longer have to meet unreasonable deadlines or face the morning traffic to get to work; that is assuming you’re still having to make the trek to the office.

Despite this logic, studies support that retiring late can also have some mental and psychological benefits to you such as delaying the emergence of dementia.

In fact, an extensive research paper from the University of St. Andrew’s on retirement and cognitive functioning concluded those who retire early have a higher chance of dementia.

Below are two quotes from the study I found the most fascinating.

“Even in this forced-retirement scenario, the protective effect lasts at least five years post retirement, up to at least age 72 for both men and women. This protective effect operates not because labor force participation improves cognitive function, but because in the natural course scenario, those who retire younger than 67 experience faster cognitive decline. This is strong evidence for Hypothesis 1 that postponed retirement is associated with better cognitive function.”

In other words, employment has a “protective effect” on cognitive functioning, which lasts for at least five years when an employee retires at age 65.

And from the Conclusion paragraph:

“Our findings suggest that postponed retirement is beneficial to cognitive function for all genders, races/ethnicities, educational levels, and regardless of professional or non-professional occupational status.”

In this study, the research showed retirement delayed until age 65 or later can be beneficial from a mental health perspective.

And good mental health certainly contributes to longevity in retirement.

These findings sort of make sense.

Most of us have experienced that working demands a schedule as well as activity, which supports good health in your later years vs becoming sedentary.

Support to Retire Early for a Longer Life

Yet other research shows the best age to retire for longevity is earlier, in your mid 50’s.

This makes sense, too.

From a logical perspective, at this age, you’ve had enough time to build retirement savings, but you’re still young enough to enjoy retirement.

A 2017 study, The Causal Effect of Retirement on Mortality by economists from the University of Amsterdam asserts that retiring early can actually make your life longer. Specifically, the research found that men aged 54 who decided to retire were 42% less likely to die in the consequent five years than those who were still working.

Still another study exploring the impact of retirement on health in Europe found that early retirees are less likely to experience bad health by more than 35%. The study postulates that retirement has a positive effect on the overall health of a person for the reasons noted elsewhere in this post.

What are the financial implications of greater longevity in retirement?

If you’re planning to live off retirement withdrawals, as most retirees are, greater longevity means greater retirement savings are needed to fund a longer life.

You should also note that your mid-50s may seem like the best age to retire for lifestyle, but not for financial security.

Retiring in your mid-sixties allows you to catch up on retirement savings allowing for longer, higher retirement withdrawals.

Retirement plans can be adapted based on both financial and health factors which both affect longevity.

Financial goals for a 50 year old, for example, might be to retire at 55 with the caveat that if investment savings get off track due to an income snafu or a bear market, retirement will be delayed as needed.

The reality is that most people haven’t saved enough for retirement with only 52% feeling on track based on 2021 data.

This is why alternative income streams have become increasingly popular ranging from real estate rentals to starting an online business and everything in between.

Alternatively, someone working into their 60’s could increase income before retirement by creating an income stream that requires little time.

Retirees are able to get the highest Social Security payments if they delay withdrawals until age 70, as a general rule.

You have access to Medicare at age 65. Delaying retirement until this time will reduce the amount spent on medical insurance in retirement.

Other Benefits of Late Retirement

Staying in the workplace into your sixties may not seem as appealing from a lifestyle perspective but it also can present some health benefits in the years before your retirement.

While 65 or 70 may not seem like the best time to retire for longevity, there are even more benefits than just health.

First, you will have more retirement savings. More savings means less stress about having enough money to retire.

Second, it means fewer years during which retirement withdrawals need to be made.

Late retirement might be the perfect solution if you don’t have much in savings or you truly enjoy the mental stimulation from work.

Final thoughts: Best age to retire for longevity and happiness

Your preferred retirement age is a personal choice that will depend on various factors.

This supports a consistent philosophy here are Retire Certain. There are no cookie cutter, one size fits all rules for finances or retirement but you’ve gotten to see what the studies reveal for both an early and late retirement.

Proper planning and insight can ensure that you retire at the best age for both longevity and a prosperous happy life.

Nation Library of Medicine: The causal effect of retirement on mortality: Evidence from targeted incentives to retire early

Retirement Effects on Health in Europe