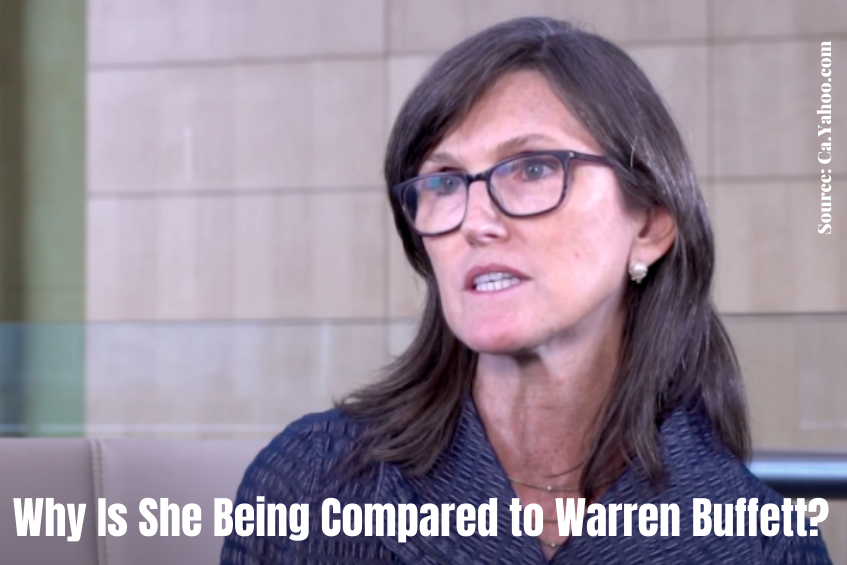 It can be impossible to know who to listen to amongst the many past and present investment experts, most with varying opinions. Investment performance, however, reveals the truth, as you’ll see in this post.

Almost anyone following the stock market news has heard of Cathie Wood. She’s become one of the more prominent leading experts on stock trends and security selection. Cathie’s even been compared to the infamous Warren Buffett in her ability to outperform the stock market.

In this article,  you’ll discover just who Cathie Wood is, and if listening to her investment advice is a good idea for your own investing.

Who is Cathie Wood?

Cathie Wood is the Founder and CEO of ARK Investment Management, LLC, known as ARK Invest. The firm provides ETFs (Exchange Traded Funds) that invest in disruptive innovation companies that sell products and services which change the way we live. Due to the market beating returns of the ARK Invest ETFs, Wood has become a closely followed investment icon.

Why Is Cathie Wood Famous?

Cathie Wood is everywhere in the financial news. There are several reasons for her growing popularity.

When an investor beats the markets, they become famous if the word gets out. Cathie Woods is one of the rare investors that has beaten the market.

In 2020, the firm Cathie founded, ARK Invest, earned a winning spot as a top 10 issuer in the ETF industry. ARK began 2020 with about $3.5 billion of assets, only to end the year with about $41.5 billion, according to Bloomberg data.  This is an enormous feat, albeit not necessarily a good sign for investors. (1.)

Adding to Cathie Wood’s fame, she was named the best stock picker of 2020 by Bloomberg News editor-in-chief emeritus Matthew A. Winkler. (2.)

Capitalizing on a Massive Trend

Cathie has been at the forefront of the popular disruptive technology investing movement through the ETF’s which her company created.

Interestingly, and somewhat unusual, Wood has explained that the founding of ARK Invest was divinely inspired, as expanded upon later in this post.

What Is Cathie Wood’s ETF?

Cathie Wood’s signature ETF is ARK Innovation. This fund is an actively managed ETF under Cathie’s leadership. The ARK Invest website shows that ARK Innovation holds between 35 to 55 companies, although when I checked, there were 55 holdings.

Given her success and fame, Cathie Wood has become an influence in the markets, meaning other institutions buy assets because Cathie bought them.

Cathie is not only popular with large financial institutions and traditional media; she has been dubbed “Queen Cathie” in Reddit forums, according to Investor’s Business Daily. (3.)

In addition to disruptive technology companies, such as Tesla, Cathie Wood is an outspoken supporter of bitcoin. Her words alone were thought to have a large influence on the price of digital currency at certain times.

Cathie Wood is the oldest child of immigrants. She was born in the USA.

Wood is a devout Christian according to Wikipedia. (2.)

In fact, the name ARK Investment Management was chosen after Cathie repeatedly noticed text about the Ark of the Covenant being taken into the Israelites while reading the One Year Bible. (4.)

Who Is Cathie Wood Personally and Professionally?

Who Is ARK Investment Management Exactly?

ARK Investment Management was founded by Cathie Wood at age fifty-seven “out of an act of faith” to establish a company that was in itself a disruptor.

The founding story of ARK Invest is absolutely fascinating so I will share it to help you understand more about who Cathie Wood really is, and her drive behind ARK Invest.

Following many years of selecting investment securities,  Cathie admitted she was doubting her abilities because she had underperformed the market in 2006. She had reduced risk in the portfolios under her oversight too early due to her sensing of the impending housing crisis. In hindsight, however, her risk management was wise, albeit a bit early.

As Cathie explained on the Jesus Calling® podcast, she felt the Holy Spirit revealing the plan to disrupt the fund industry with new technologies. She felt called to brainstorm with competitors about new ideas and to help spread the word about creative technologies.

Cathie Wood followed that inspiration, funding ARK Investment Capital by herself for three years. At the time of the founding, Cathie believed her career was starting all over again. She felt her endeavor was encouraging “God’s new creation”.

Cathie felt that in starting ARK Invest, she was fulfilling God’s will for her; if she had not done it, she said she would have died unhappy and unfulfilled.

Cathie Wood and Warren Buffett are at opposite ends of the investing value vs growth spectrum.

Cathie Wood invests in companies that are known as disruptors. These companies naturally tend to be highflyers, like Tesla, and technology companies such as Square and Roku. As such, these companies usually trade at large premiums to their valuations, as revealed by high PE ratios and other measures.

Investors buy these companies to get in on the growth, often before such companies are profitable. Finding growth potential is Cathie’s forte.

It’s worth pointing out that Cathie has openly declared at times that the stocks in which her funds invest are likely to “adjust” when if a sharp rise in interest rates occurs and fear sets in.

Quite different from Cathie, Warren Buffett is a value focused investor. His mentor was the grandfather of value investing, Benjamin Graham. As such, Warren invests in more mature companies trading at a discount to their value. These companies typically trade at low PE ratios.

As Investor Business Daily notes, when it comes to Cathie Wood vs Warren Buffett, we don’t want to rule out Buffett given his investing success through many decades of market cycles. (3.)

What Is Cathie Wood’s Background?

Cathie Wood, however, is not new to investing. Born in 1955, Woods has been in the investing arena since she graduated from the University of Southern California.  Prominent economist Arthur Laffer was a professor at Southern Cal where he became her mentor.

Many wonder if the ARK ETFs are good investments. While there is no doubt that Cathie Wood is a brilliant investor and leader, the overall markets influence almost all investments. This reality must be considered when selecting the best investments for you personally and the timing of making those investments. It can be hard, however, not to follow a leader like Cathie Wood.

A core principle of investing is this: ETFs and funds that hold value based assets outperform growth types of assets during economic slowdowns and market downturns.

And growth assets, such as Tesla and Square, do well during periods of strong economic growth.

This core investment principle just makes sense, even though it’s easy to overlook at times.

Whether or not ARK ETFs are a good investment for you depends on your investing time frame, financial goals, and risk tolerance. I promote that investing starts with an overall wealth plan which defines all of this. Investments are then chosen from that place of clarity.

It’s worth mentioning that sometimes the smart money is heading for the exits as less savvy investors rush in.

On the other hand, the party usually lasts longer than anyone expects it to last so those on the sidelines underperform. This quandary presents the classic FOMO (Fear of Missing Out) when investing.

While I might be tempted to do so when valuations are considerably lower, I am personally not invested in ARK ETFs as of this post. Instead of trying to figure out when the party will, in fact, end, I invest in a structured tactical ETF portfolio chosen based on decades of backtesting data and invest in carefully chosen value based investments selected for income generation. I sleep well at night with this investment plan.

Now you know who Cathie Wood is and why she has risen in popularity. I don’t know about you, but I’m inspired given Cathie Wood’s unusual story, her outspoken honesty about it, and her investment success even though the funds she manages may be expensive and subject to high volatility.

Check out my Ultimate RISE Wealth Plan here or in the image above.